TUCSON, AZ – Darrell Midgley recorded his best ever finish at Tucson Speedway Saturday night.  The Sidney, British Columbia driver finished fifth at the 4th annual Turkey Shoot 125.  “We were definitely competitive tonight,” exclaims Midgley, “it was a solid fifth place finish for sure.”  Midgley kicked off the weekend on Friday night with a 7th place finish in a 50-lap preliminary race.  “We had a pretty decent car for the entire race but earlier in the day we weren’t very good.”  During Friday afternoon qualifying Midgley had a close encounter with some red and white concrete.  “I brushed the wall on my first qualifying lap but thank goodness there wasn’t any damage.”  With a Friday night top-ten finish in the books, Midgley and Team NPP focused on the big race.  Unfortunately things became a little blurred during final practice Saturday afternoon.  “A piece of the race track broke off and came up and went through the radiator.  That really put us behind.  We had to focus on repairs.  We barely made it out for qualifying.”  Midgley would post the 11th fastest qualifying time but would start the race at the back of the pack.  “We needed to do some more work on the car so we gave up our starting position.” 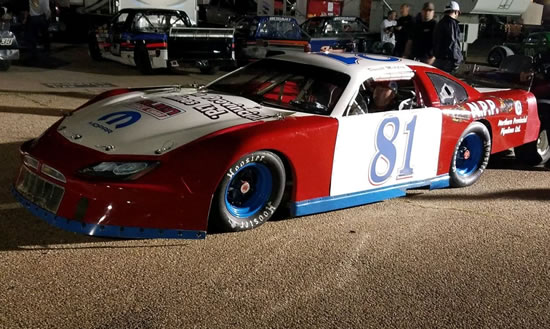 At the drop of the green Midgley methodically made his way towards the front of the pack.  Just past the midway point of the 125 laps race he found himself in third.  “We were holding on to third for the longest of time but we got a little wore out.  There are a lot of good drivers that race here and they are hard to beat.”  The Saturday night Turkey Shoot 125 had just one race stoppage.  “There was a mandatory fuel stop on lap 40 and that was it.  The race itself had no cautions.  It went the whole way green which was really nice.”  Geeley, Colorado’s Brett Yackey won the 125 lap Feature with father Bruce in second.  Brandon Farrington, the 2018 Tucson Speedway track champion, was third. 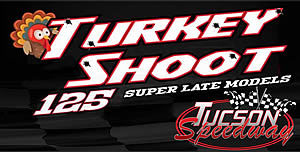