BEAULIEU BEST IN THE WEST

ELMA, WA. – British Columbia’s Jason Beaulieu is making the most of his limited racing season in 2010.  The 2007 Northern Provincial Pipelines Late Model Series Champion drove his open wheel Modified to victory lane at the 11th annual Shipwreck Beads Modified Nationals at Grays Harbor Raceway Saturday night.  “I’ve been racing a long time and I have to say that this is my biggest win ever in a modified.”  The Campbell River, BC driver says the competition was extremely tough with a record 68 teams (including 4 Canadian teams) at this years event.  “You have the best of the best racing here (this weekend) and to be able to come out on top is something else.”  Beaulieu’s race weekend got off to a strong start by qualifying second fastest in his brand new #90 Alien Chassis sponsored Modified on Friday night. 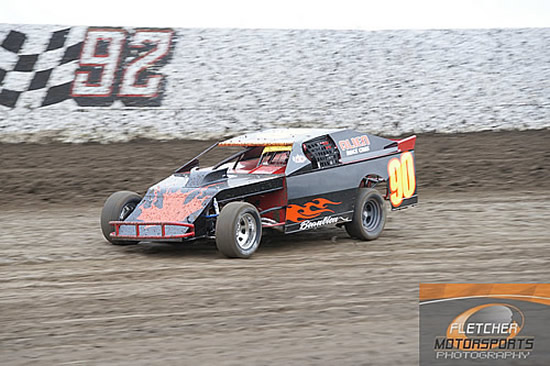 BACK TO BACK FEATURE WINS IN WASHINGTON

Beaulieu won his Heat then grabbed the Friday night Feature which automatically locked him into Saturday night’s big show. “I drew a #12 pill for the start of Saturday night’s race so I knew I had a lot of work ahead of me.” At the drop of the green it took Beaulieu just 8 laps to take over the race lead from his starting position. Challenging Beaulieu the remaining 32 laps was the #1 qualifier on the weekend Scott Lenz from Shady Grove, Oregon. “I knew he was behind me but we managed to hold him off.” At the checkered flag only 8 of the 24 cars that started Saturday nights Feature finished on the lead lap. “We had a pretty good run to the front,” admits Beaulieu, “the car was hooked up in the corners. Yes there was a bit of a challenge getting through the lapped traffic but that’s all a part of the race.” Beaulieu’s son Chris finished 9th in Saturday nights Feature. NPP Late Model Series backup driver Lawrence O’Conner from Port Hardy, British Columbia finished in 6th. Beaulieu is the manager and co-owner of Pacific Cachalot, a tugboat company in Campbell River, BC. “Work has really gotten in the way of racing this year,” admits Beaulieu, “this was only my second race weekend of the season.” Beaulieu has been the winningest driver the past two seasons in the NPP Late Model Series with eight feature wins.