TUCSON, AZ – Darrell Midgley registered his best-ever finish at Tucson  Speedway Saturday night.  The Sidney, BC driver finished fourth in the second of two Super Late Model Feature events contested at the Arizona track.  In the first Feature of the night, Midgley finished seventh.  “It was a really good car tonight,” exclaims Midgley. “it was so balanced on the track.”  Both Super Late Model Features saw plenty of passing along with three and four-wide action.  Two-time Tucson Speedway track champion Brandon Farrington claimed the opening Feature.  In the second Feature, Midgley found himself in the race lead before the end of the first lap.  On lap 15 the field would slow courtesy a single car crash into the turn 1 wall.  On lap 16, just 1 lap after the restart, safety crews returned to turn 1.  This time it was for a multi-vehicle crash.  Fluid and debris from the wrecked race cars forced track officials to throw the red flag for an extensive clean up.  The red flag lasted just shy of 30 minutes.  “Its a long time to sit in a car and do nothing, ” explains Midgley, “but once you fire the engine back up you get back in the zone.”  Just past the halfway point Midgley had built a 3 second lead in the Northern Provincial Pipelines Ltd./Alien Race Cars #81 Dodge.  With 12 laps to go victory seemed almost certain for Midgley.  When the scoreboard read 10 laps remaining, Midgleys massive lead began to evaporate.  Tremendous pressure was being placed on Midgley by three drivers, including Brandon Farrington, the winner of the first Saturday night Feature.  “I couldn’t get off the corners like I was earlier in the race,” says Midgley, “I just got out of rhythm near the end.” 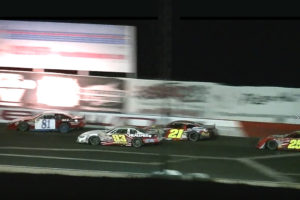 MIDGLEY, THOM, RAZ AND FARRINGTON BATTLE FOR LEAD IN TUCSON

Midgley surrendered the lead to Washington’s Austin Thom with just 9 laps to go.   Oregon’s Kole Raz grabbed the lead from Thom a few laps later and drove onto victory.  “It was like they (Farrington, Thom and Cole) were shot out of a cannon,” exclaims Midgley, “we all had fast cars tonight. We were so close to getting it done here tonight.”  Midgley’s fourth place was his best ever finish at Tucson Speedway.  His previous best finish in Arizona was 5th back on November 23rd.  Next race for Team NPP is at Wenatchee Super Oval in Washington State on April 27th.